A polydactyl Maine coon is a Maine Coon in every characteristic and with extra toes.  This word means multi-toed, and the extra-large paws are nick-named double-paws, because the paws are usually double-wide in size.   They can walk through snow more easily, hence another nick-name of snowshoe cat; but most often though, they are simply called polys.
A natural anomaly, the polydactyl dominate gene in Maine Coons is a simple autosomal, meaning not linked to a dominate gene.  The Pd gene is a harmless genetic trait that is not to be associated with other anomalies. Because of this, you must have a polydactyl parent to have a polydactyl kitten.

Why Aren't Most Maine Coons Polydactyls?
Good question! This trait is not allowed in “show cats” so it is not common. Many breeders participate in showing their cats. That's a big part of what it's all about!
It is unfortunate that a magnificent feline would be denied the chance to become a champion just because this trait is deemed a "fault." Because of this, there are groups and organizations with an eye to bringing Polydactyl cats back into the show ring.
There are breeders who specialize in polydactyl Maine Coon cat and kittens. They are fully registered, pedigreed, purebred cats. Every bit a Maine Coon – plus some (extra toes, that is)!
So there you have it, the polydactyl cat is a healthy, hearty, and endearing cat! You want one, now, right?
The History of the Polydactyl Maine Coon
Maine Coons come from Maine and polydactyl Maine Coons most especially show their Maine heritage visibly in their extra-wide, multi-toed
​paws.

Descended from cats that hardy seafaring people chose, our present-day polydactyl Maine Coons are a direct visible genetic link to the beautiful heritage of maritime family life. A polydactyl Maine Coon from a Kennebec River town or village has living visible proof of its original native Maine heritage. This heritage goes back through the generations of kittens possibly 300 years or more, to the earliest Maine cats, when the polydactyl gene became intertwined with and irrevocably part of the original Maine Coon.

Purified by centuries of natural selection, polydactyl Maine Coons embody the most distinct and visible proof possible of the long and esteemed heritage of this native Maine Coon breed.

A polydactyl Maine coon is a Maine Coon in every characteristic and with extra toes. This word means multi-toed, and the extra-large paws are nick-named double-paws, because the paws are usually double-wide in size. They can walk through snow more easily, hence another nick-name of snowshoe cat; but most often though, they are simply called polys.
The history of Maine's polydactyl Maine Coon tugs and whispers from the porches of stately sea captains homes and from memories of old ships and schooners; one wonders, how did the double-pawed cats get here?

The visible heritage embodied in a polydactyl Maine Coon stems from the olden days of Maine, when hardy self-reliant families sailed and settled along the shores. The distinctly unique Maine coastal environment favored the origins of this breed. The byways, sloping shoresides, and deeper coves were launching ways for locally built schooners and other vessels. Salt-water farms lined the shores where we have forgotten now, that everyday people did business by sail with canvas and masts and wind, not trucks and gasoline. The highways of yore were the rivers and the sea. Maine has excellent deep and navigable rivers. The Kennebec River, for example, is famous for the number of vessels built and launched from its shores. The talented Maine maritime families and the vastness of the trade they dealt in are the real reason it is the Maine Coon Cat. This breed was developed in the Maine coastal regions specifically as a result of ship cats coming home to families who prized them for their usefulness aboard ship as well as on the farm and around the wharves. The years following the Revolutionary War were likely the heyday of the Maine Cats development, as the state was known for its bustling shipyards. Downeasters sailed with wheat world-wide, clippers sailed to China and back, but mostly the trusty schooners carried vital local maritime cargoes; as hundreds of various Maine-built vessels were launched every year from riverside shipyards.

Cats were just as common at working waterfronts as dories, and are still to be found living free at the working waterfront area of Portland Harbor, for example. When Kennebec cargo schooners sailed to Boston and back with lumber, bricks and supplies, cats were simply on board to control rodents, and for pleasure. Boston Harbor has been scientifically designated the arrival point in this country of the polydactyl cat, and location of the first polydactyls in America. It was an easy matter for the cute poly cats to be accepted aboard the Maine-bound vessels, for luck as well as something new to share with family at home. The Boston wharfside poly cats and Maine-bound schooner cats mingled as they pleased.

In this manner, the poly gene was introduced into the isolated early Maine Coon gene pool; protected as it were, by villages united only by sea or horse-drawn wagon. The early Maine Cats were able to breed pure and without dilution, and the polydactyl gene became intertwined with the other characteristics, back in the chill coastal and riverside locations, where the pure strain of Maine Coon was developed. Long-coated, rugged bodied Maine Coons naturally developed for survival, as a working cat that people treasured, and their adaptation to the cold winters and chilly ocean air resulted in eventual recognition as a legendary distinct breed.

The poly Maine Coon is more adept, and often smarter, because of the increased ability that the shape of their paws gives them. Their larger paws enabled them to survive in conditions requiring them to catch their own food. Some of them always survived and to this day the dominant gene, polydactylism, continues to be present in a certain percentage of native Maine Coons. Being still visible, it is likely present in the same percentages now as in the earlier times. It can be estimated rather accurately from genetics rules that a constant minimum of 25% of early native Maine Coons would have been polydactyl, and perhaps more in some isolated locations and the many coastal islands.

Thus the early Maine Cat developed into the traditional type and style still seen in todays moderate Maine Coons. These early Maine cats were known as 'Maine cats' or 'cooncat' in the mid-1800's (in a story by a celebrated Maine author of that period, whose cat named "Polly", grew up together with her.) Of course, normal-footed Maine Coon Cats developed concurrently, often as litter mates; and were the feline stars in the first CFA Cat Shows in the USA in the early 1900s. 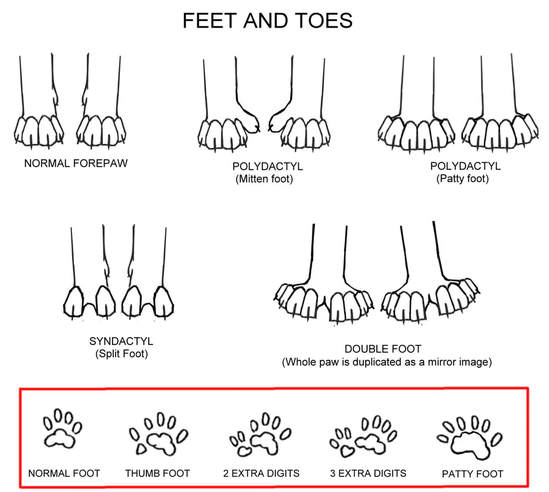 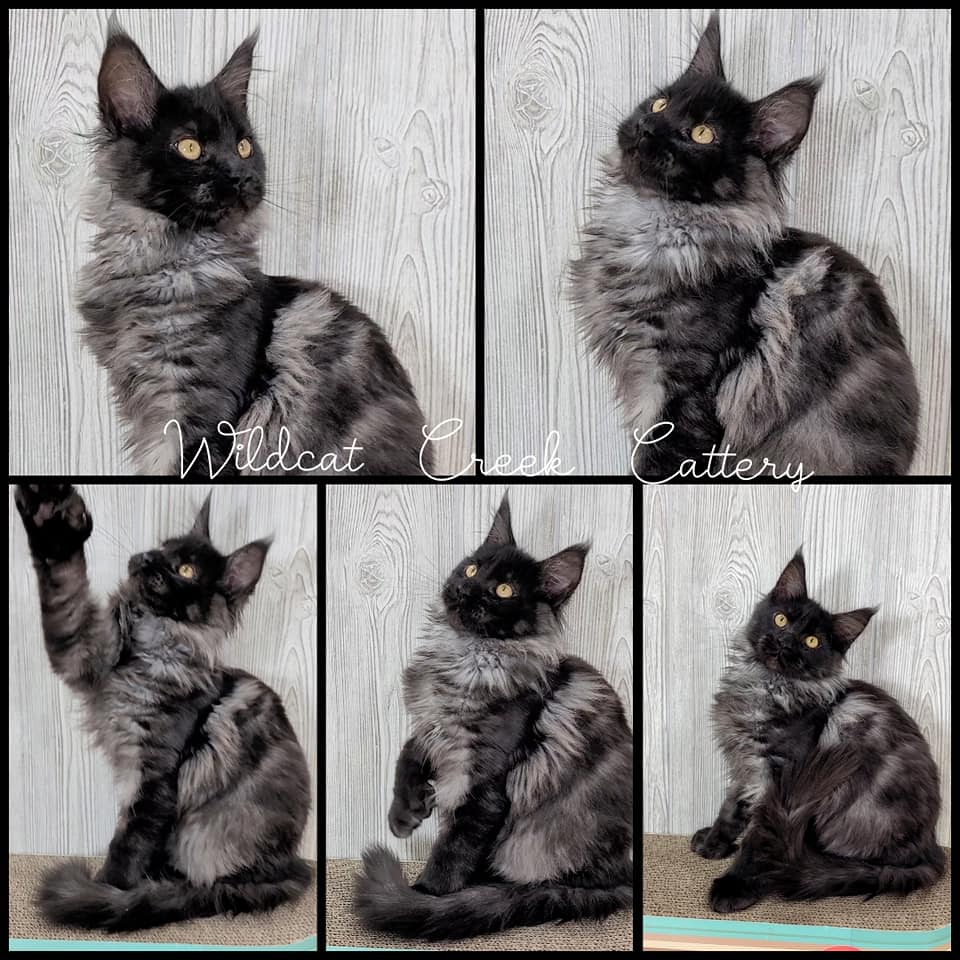